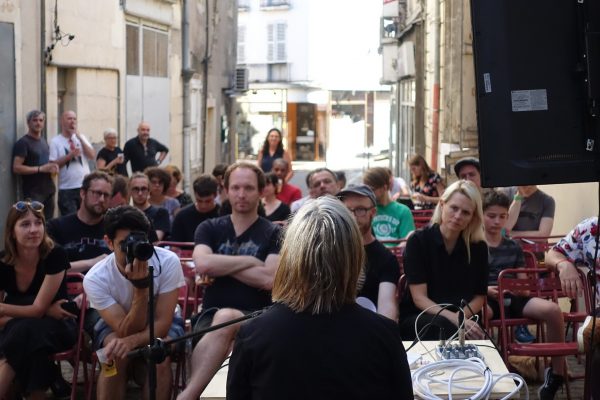 On July 1-14, the inaugural edition of Nø School launched in the sleepy town of Nevers, France. Intrigued by Nø School’s no-frills approach, Makery took a field trip to the Burgundy region to catch Nø School on its closing days.

Nevers has a new reputation to be an obsolete town. Thierry Chancogne wo is taking in a visit to Ravisius Textor, a space that he co-manages, doesn’t seem to bother so much about it. The Ravisius Textor space is one of the evening venues open to public events during NØ School. The venue’s Latin name is a reference to Jean Tixier, Nevers’s own 16th century humanist. Established in 2017, Ravisius Textor houses a gallery, bookshop and print workshop. The choice to locate the school in Nevers was an homage to the town’s rich history and, as Paris-based artist, educator and NØ instigator Benjamin Gaulon stated in Poptronics, also a way to give the local economy a boost.

There are no study tracks at Nø School: each participant customizes their own course according to their interests, along the way building team spirit. The school’s participatory approach to technology is reflected in NØ’s mission to develop skills and engage in critical research around the social and environmental impacts of information and communication technologies. Clarifying technology uses instead of mystifying them was only one of the themes of the dense program, during which 32 Nø teachers gave presentations and workshops at the main venue of Manufacture de Faïence Montagnon, a former ceramics factory spread over 600m2 on three floors.

“I’m an artist myself, but could get a lot from the school, being not that tech-savvy,” said a Nø student from Ireland who learned a lot from hackers, programmers and tinkering peers. The 19 participants of the first Nø School came from France, Canada, United States, Ireland, Russia and Portugal. The school’s non-hierarchical approach between teachers and students encouraged students to interact more and ask questions—unlike in most French schools, where “the hierarchy between students and professors is very present,” according to a Nø student from Paris.

This inclusive environment created a space for horizontal relations in the arts, sciences, research and all around techno playfulness. Critiquing dominant uses of and approaches to technology was the focus of many fields explored at this first edition: coding, mobile technology, e-textiles, design, publishing, hacking and media archaeology. The program included over 20 workshops and lectures, a field trip to a local waste incinerator, as well as evening talks that were open to the general public by Ted Davis (read our interview), Alex McLean, Dasha Ilina (also a Nø School co-organizer), Gijs Gieskes, Alessandro Ludovico, Nicolas Maigret, Jerome Saint-Clair a.k.a. 01010101, Daniel Temkin and many others.

The Nø curators and facilitators constructed a meta-structure that could work beyond the time limitations of a summer school format. Nø Lab, one of the organization’s research units, created lab-like conditions for future endeavors. This year’s teacher artist and engineer Jerome Saint-Clair, along with Internet of Dead Things Institute, will present MinitelSE at the NEMO Biennial 2019 in Paris. MinitelSE is an open source operating system running on a dedicated hardware designed for Minitel, France’s pre-World Wide Web online terminals.

An original 1980s Minitel was presented as Minit’aime at the Ravisius Textor gallery as part of the closing event, along with works by Nø students and their teachers. “Blushing MiniTaime”, a collaboration between Joselyn McDonald and Jerome Saint-Clair, was developed as an homage to the popular early use of Minitel for dating and flirty chatrooms. Many of the participants found inspiration in the concept of reused and recycled technology, trying to create new contexts and new contents for new environments.

In the future, Benjamin Gaulon says he might change the location of the summer school and risk big-city distraction by bringing the school to Paris. In that case, Nevers might end up as a site for Nø residencies. This would bring long-term development of art, technology and research projects to the town, placing Nevers squarely on the media art map.

Named after a fleeing young nun who came to Nevers in the 19th century, Sainte Bernadette Church provided an otherworldly venue for the roaring sounds, synths and drones coming from the performers’ machines and objects during the two weeks. Expressing a reinvention of the form of World War II bunkers, the church also represents an endless quest for modernity and renewal in architecture. How appropriate when one considers the reinvention of technology. “Tech won’t save us” screamed Gaulon’s t-shirt on closing night. Indeed, it may be high time that we save tech.